The Core: Flexion, Extension, and Rotation?

The “core”, and I use that term loosely; can do each of these three things.  The question is, should people train them, and if so, to what degree?   Ask anyone and they’ll tell you that a strong core is important regardless of whether they are an athlete or not.  In the past 5 years or so there has been a real push in the fitness industry toward eliminating flexion, extension, and rotation specifically of the lumbar spine.  Sometimes I think this crusade is much smaller than originally thought when I see what other trainers, strength coaches and average gym goers are doing to make the almighty “core” stronger.   After taking a good look at the situation I made a vow to my clients (they had no idea back then) and to myself that I would eliminate such enemies of the spine, i.e. crunches, back extensions, Russian twists, beginning in January ’08.  So far so good.

There are two ways that I look at the situation.  The first is from an anatomy standpoint.   According to renowned physical therapist Shirley Sahrmann the discs of the lumbar spine have an “overall range calculated to be approximately 13 degrees…….  The thoracic spine, not the lumbar spine should be the site of the greatest amount of rotation of the trunk.”  Also, in a healthy individual the hips are mobile.  This sets the table for a healthy and stable lower back.   Sahrmann goes on to state “dominance of the activity of the rectus abdominis over that of the oblique muscles can result in a compromise of the control of rotation.”  Which to me means that individuals focused on carving out that six-pack through thousands of crunches are doing themselves a disservice. 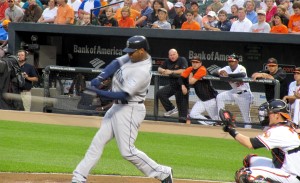 Hip Rotation but lower back is flat and neutral

Common questions from athletes and clients are if the body is capable of these movements why not train them?  It seems logical.  However, it could argued, and has been by Sahrmann as well as Porterfield and DeRosa that the role of what most consider their “core”, is to prevent such movement.  These muscles are anti-flexors and anti-rotators.  In these pictures most movement is coming from the hips and shoulders.  The only time I do a crunch is when I sit up in bed in the morning but certainly not throughout the rest of my day do I do anything resembling such a movement. 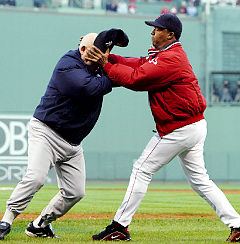 Or here, for that matter.

The next point is that spinal flexion, extension, and rotation exercises are mostly isolated movements.  With little exception I personally do not program exercises that aren’t multi joint and don’t have some carry over to another body part.  I consider crunches to be like bicep curls only with long term potential for injury.  I just don’t have time for them considering both my clients and I generally have much more important goals than to only build big guns.

That being said, what are the alternatives?  The abs act as anti extensors, so a great choice is the ab wheel rollout.  Most people need to use a ball that is higher off the ground to successfully perform this exercise.  To train the obliques, instead of doing various side bend and twisting exercises, and putting a tremendous amount of torque on the lumbar spine I suggest grabbing a moderately heavy dumbbell or kettlebell and taking a short walk across the gym.  I call it the anti side bend exercise.  Others call it a suitcase carry or a farmers walk.  Lastly, learning to properly deadlift and swing a kettlebell should suffice in training the anti flexion muscles known as the low back.  These are merely a few examples in an array of quality multi joint movements that can help link the body as one unit and build “core” stability, which is what we should be training.

4 Responses to The Core: Flexion, Extension, and Rotation?