So I read Jen Sinkler’s interview with John Broz the other day and I was totally inspired. John sounds like an awesome dude.  Why?  Because he is so damn passionate about olympic weightlifting.  I love that.  He seemed to really open up about his training philosophy which I was a little familiar with but it was great to read his words.  Part of the reason I was so inspired too was because he was talking about how much effort it takes to reach the top.  Real guts, not just half-assed shit.  And this got me thinking.  Do I have any intensity at all?  Do I not train hard enough?  Do our members train hard enough?  Oddly enough, later that night I was reading the book “Easy Strength” which has been sitting on my coffee table since the blackout during the Super Bowl.  In it Dan John and Pavel are talking about getting in lots of reps with low percentage of max effort, coaxing out PR #’s and max effort lifts only a few times a year.  Sooooo, much different than what Broz is talking about.

So I then began to think about several things.  Many of them I have considered before but slowly and steadily the picture is becoming clearer.  Your training style really depends on what your game day calls for.  You play like you practice.  If you are any kind of athlete then you’ve probably heard that before from a coach.  Well, ask yourself right now, what is your game day, your Super Bowl?  The most important thing?  No answer is incorrect, just figure out what it is for you personally.  Is it a weightlifting meet, it might be the upcoming football season, but it could also be to look stunning in that white dress a few weeks from now, or it may be literally 20 years from now when you hope to still be chasing the grandkids around without limping or being completely winded (little Johnny is going to learn more from that ass whipping you give him in basketball than you letting him win.  He needs you). 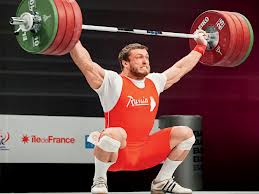 So what does it all mean?  We teach 80% effort to be done roughly 80% of the time.  In Sinkler’s interview Broz’s athletes are generally working towards 100% effort, often twice a day!  Far different, but this is where I’ve had my epiphany over the last couple of years.  Broz talks about practice and getting reps.  I love the analogy he uses that discus throwers don’t use Frisbees to practice and if you want to be better at throwing darts, you should probably throw more than just 2 darts a day (10,000 hours anyone?).  That makes a lot of sense to me.  I can get on board with that.  However, your answer to the question in the previous paragraph should dictate how you train in the gym.  If you want to be a weightlifter then listen to John Broz because as he describes, the work put in equals results out.  However, if your first priority is performing in a different sport or to again, look stunning, then your sport/skill practice (just as he talks about) will not be as heavily reliant on the weightroom.  It may still be very important, but to maximize your potential in that sport or to look good in that dress you need to lift relatively heavy weight, not necessarily to lift the most weight.  There are several other pieces that will complete the puzzle.  One example and I only use it because Broz mentions it the interview, is that his athletes don’t do plyometrics, which makes sense to me, but he expects that track athletes might.  To clarify, are you a weightlifter who plays (insert sport) or a (insert sport)er that lifts weights?  It pays to be strong for various reasons, no doubt about it, but when you are sprinting down the court no one cares how much you actually snatch.  The difference is that in weightlifting specific numbers do in fact matter because the numbers determine who wins and loses.  That is not so much the case in other sports, especially team sports.  Roughly one trillion other factors (note sarcasm) will determine the outcome of a football game.

I have been privileged enough to train alongside some pretty good Olympic weightlifters or as Broz might call them, terribly average, and during this time I often thought to myself, why are they always enduring so many aches and pains?  Why is this ok?  Quite a while back was the first time I can recall coach Charles Staley talking about when you want to truly be elite at something you are going to have to sacrifice some health.  Unfortunate maybe, but true.  So, I then asked myself, would I question a basketball player who is 40 games deep into a season and has some chronic aches and pains any more than a lifter who has some knee pain from training heavy regularly and trying to get better at his chosen sport?  I think the answer has to be no.  Athletes in all sports endure aches and pains regularly, and I would argue especially those that compete at a high level.  In my world, as I look around at the people I know and work with, 99% (probably more) of us don’t actually want to be elite at weightlifting.  We want to be elite at looking good naked, or at coaching your kids in life and on the basketball court, or just good at a certain sport.  In an effort to perform at those endeavors, training in the 80% zone is the way to go.  100% effort is designated for on-field practice, off-season situations, family, friends, or enjoying a long and fruitful life.  Many athletes do approach 100% in practice on a daily basis, just like Broz’s athletes do, it’s just done on the field instead of in the gym.  Please do not be confused.  80% is not about being soft and weak.  It’s about being consistent, training smart and picking your spots so that you have 100% to give in your actual practice.  Hell, I don’t care if you go nuts 12% of the time, just realize that other 8% is left for when life gets in the way and you don’t feel awesome and you need to dial back your training.

Again, it’s taken me a while to figure this all out but John Broz lives in a different world than many of us.  He’s proven that he is pretty awesome at what he does but it’s not what the majority of us need to do.  His athletes Olympic Weightlift to be better at Weighlifting.  Most of us, myself included, lift weights to be better at things such as Highland Games, looking good naked, keeping up with the kids, etc.  Ultimately you do “play” like you practice.  For most of us we are “in-season” most of the time, but perhaps more importantly you need to understand what your “game” is.