Strength In The Real World

Within the last 5 days or so several members have at random shared with me situations where their strength was called upon in the real world and well, they………. nailed it!  One such situation occurred at work in the restraint of another human being (I won’t elaborate further).  It just so happens she was one of the ladies in the video from the last post demonstrating that strength.  Another was someone who ended up carrying their stubborn dog several miles because it decided it didn’t want to walk on the beach.  Lastly one female was challenged to carry a roughly 200 lb. male on her back a predetermined distance in a $100 bet.  Needless to say, Winner!  These recent stories reminded me of some others that members have shared with me over the years including moving couches, kegs and large bags of dog food.  I’m always excited to hear stories like this knowing that people are building and improving confidence in not only how they look but also in performance.  Just a few more reasons not to be a weak human being.  Pardon the profanity but…….. 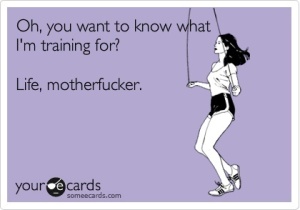 I love ‘em.  They are good for you.  Let me tell you why.  Squatting through a full range of motion is a basic human movement.  It takes a fair amount of mobility, something that people tend to lose as time goes on.  Fight it!  That being said there are many different kinds of squats, some which may or may not better suit you.  This is what most people think of when they see a squat, and if you can do it WELL, then awesome.  More power to you.

If that’s not appropriate for you then no need to try and fit square pegs in round holes.  This more likely suits most people. 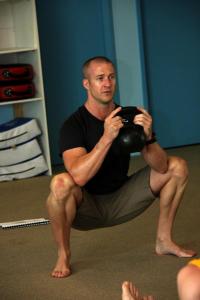 But, that doesn’t mean it’s for everyone.  Sometimes this is most appropriate and that’s ok.  (TRX Squat)

The point is you are squatting.  Going through the proper range of motion and not regressing so far that one day you are unable to stand up out of a chair or off the toilet without some sort of assistance.  You don’t have to put the bar on your back, you just have to be able to squat.  Or, if you are like Max Shank, you don’t roll out of bed in the morning, you squat up out of bed as he doesn’t believe in using a bed frame so as to maintain the ability to squat for a lifetime.  Hey, to each their own.  If his physical prowess is any indication, get rid of your bed frame.  Just sayin’.

A movement or development toward a destination or a more advanced state, esp. gradually or in stages.

A succession; a series.

It’s summer time.  School is finishing up.  Maybe you are headed to the beach or you’re an athlete with a little bit of time off.  Are you looking to hire a coach or what some call a “personal trainer”?  I was thinking about PROGRESSION yesterday after a conversation with another coach.  I think it’s one of the more important things in training.  If you’re looking for a coach, try and find out if this person has a set list of progressions that they use on a regular basis.  Your first day in the gym should not be a rough day!  If you are vomiting, and yes this happens, your coach did not take care of you.  No one needs to start at level 10 on day one.  If you’re a coach you should have a plan.  What comes next?  It could be today, next week, or in 2 months, etc.  It doesn’t have to be set in stone as different situations will dictate different needs but part of the same plan really.

Any dummy can make another individual sore or make something so difficult that he or she can barely perform the movement.  However, that doesn’t make you better and there’s no progression there.  It’s like learning a sport.  If you had a private lesson with legendary basketball coach Phil Jackson tomorrow, would you listen when he taught you how to properly dribble, posture up on defense and pass the ball?  Or would you say, “Listen, Phil.  Although I’ve hardly played organized ball in my lifetime, I’ve been shooting hoops in my driveway since I was 5.  Let’s practice draining some 3’s and running the triangle offense.  This other stuff is B-O-R-I-N-G.”?  I would venture to say no.  Training isn’t that much different.  You get a new coach, you start with day 1.  Maybe you progress quickly, maybe not, but the first few days should be relatively for everyone as you PROGRESS.  Like the above definition, it’s development toward a destination.

2 Responses to Life, Squats and Progression