If you don’t know already, strength is a big deal to us at Ambition Athletics.  Just a few weeks ago I wrote Why Strength? and in the past we’ve touched on such topics as Strong Is Beautiful, Strong At Any Age, Strong Is Sexy and Strong Fixes Everything, among others.  Well, you know what?  Strong is fun too!  As much as we preach the importance of strength in reaching fitness and performance goals we also emphasize that if it’s not fun, don’t do it.  Training should be enjoyable on some level, not drudgery.  Very specific goals such as “I want to deadlift 500 lbs” require very specific action but not everyone has goals that specific.  Not a problem.  Just “playing” with strength is fun too and can also be very effective.  There are a lot of ways to do that. 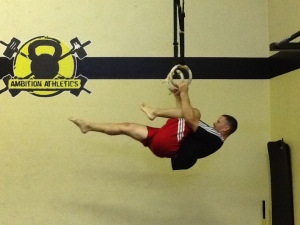 Not everyone walks into Ambition Athletics inspired to get freakishly strong.  Understandably some just want to look better and feel better.  But as I’ve said, to look better and feel better typically takes strength.  So, what makes it fun?  Well, I’m not entirely sure but what I do know is that I’ve seen many a smile after watching someone pull a heavy deadlift, do their first pull up or accomplish a goal.  So, part of it is the joy that comes from smashing goals.  The other part of it is discovering things about yourself that you maybe thought you could never do, or in some cases hadn’t done in many many years, like a handstand.  I love seeing people catch the bug and seeing the satisfaction that comes from getting physically stronger.  This especially holds true for women.  Recently, and for the first time in my life I started practicing elbow levers (seen below).  Now, as a large 32 year old man this is no easy task.  As you can see from the picture I haven’t quite mastered this move yet, nor (some would argue) do I have the body type of a young Asian gymnast to help me be successful, but I will tell you what, I’ve been practicing on a weekly basis and it’s been challenging.  However, I’ve improved, and it’s FUN.

So what are some other movements that are more fun than using a several thousand dollar seated bicep curl machine?  Other than some of the more traditional strong lifts like a deadlift and press or bottom up press, which can be fun to master, bodyweight movements such as elbow levers, handstands, front levers (seen in the first picture), etc. are awesome and with the right progressions can be enjoyed by an awry of people.

Don’t forget it’s ok to just play sometimes.  That’s what kids do.  Or at least I know they used to before the days of putting a high powered computer in your pocket.  If you don’t have very specific goals, (which is perfectly ok) and you just play around with the right moves, also known as quality training, you will be able to make great changes to your body while getting stronger and having fun.  Recently I read an article by George Hackenschmidt.  It was written in 1908 but applies still now.  Here’s a quote: “The knowledge of one’s strength entails a real mastery over oneself; it breeds energy and courage, helps one over the most difficult tasks of life, and procures contentment and true enjoyment of living. Who would still lag behind in inactivity and weakness?”